I had a great weekend.In my mind it was some of the best stuff that summer is made of. Just floating around in the pool with my straw hat and sunglasses on. Um, I had a bathing suit on too. No nude swimming in the middle of the day. I'm kind of strict about that rule. My doggie was floating on the raft with me. He will just climb right off the steps and right onto the raft because he doesn't like to be left behind. Ever.People I loved were there. Baby Sen was there in all her fanged glory. If you haven't had the pleasure of seeing this vampiresque girl, you need to. It will lighten your heart's load. I promise. She has two fangs in her upper mouth. It's hilarious and adorable.

The sun was hot but the pool was cool and there was a pleasant breeze in the shade. We ate food cooked outside. Many meatless treats including deviled eggs which is kind of the king of egg preparations in my book. Speaking of meatless... I have completely lost the taste for meat. It has been a long time coming but I really just can't really even choke it down. Maybe it is a mental block but meat tastes bad to me these days.

I'm pretty sunburned but it is a pleasant, albeit slightly painful, reminder of the great weekend. Hooray for summer. Though I am not a huge fan of the heat I am most definitely a fan of most other things summer.
Posted by merry at 5/31/2011 12:52:00 PM No comments:

Just for today, Do not anger.

So, I have started my Reiki classes and for those of you who do not know what Reiki is, look it up. Lot's of people think it is a new age or creepy thing to do and really, it isn't. It's just the laying on of hands. It uses energy which we all have to heal. I make sure that I am giving credit to Jesus. He gives us the energy, in my book.

Anyway, the first principle to live a life of happiness is, "Just for today, do not anger". We focus on the moment, the present and we do not let anger get the best of us. Anger hurts us and it hurts those around us. I have been letting go of anger. It is quite liberating. In fact, I recently saw someone that I was EXTREMELY angry with at a party for a friend. I was able to tell him that I forgive him. I told him that we wouldn't be close but I would be civil. I told him that I don't trust him( and probably never will) but I will not actively harbor anger towards him.He thought that was nice but... it wasn't for him. It was for me and for others who were affected by my anger. I feel good about it. Sometimes I have to remind myself that I have let go of the anger cause let's face it, sometimes people fuck up BIG TIME. Then again, so do I. It's important to remember that.

I'm still feeling content with my life. I'm really enjoying simple things. I always have but sometimes, in the past, I have felt perpetual discontentment. I would always think I would be happy if I just had the next thing or if a certain situation would resolve. But things break and we can't control other people or their behavior. I want people to act and be a certain way but I. CANNOT. CONTROL. THEM. It is kind of rough to come to terms with that but it is just the plain damn truth. So, I'm trying to be what I value in other people. I'm trying to change what I can and release trying to control what I can't. It's like that old completely overused Serenity Prayer. I always wondered why the 12 step groups used it. Cause it's kind of true. 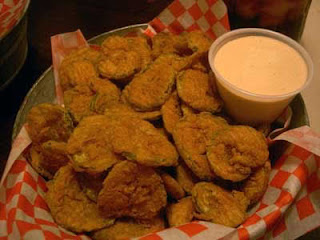 Here you go, loyal readers. I am sorry that I have been neglectful but in fact have been not only quite busy but also quite unmotivated as well. Forgiven? Ok, so a few things.


A. Been meditatin'. Not just meditating. Meditatin' makes you so relaxed that you leave of the g. I made that up. I have been doing guided visualizations. Nothing crazy or weird just going to my sacred place which is just a non overused version of my "happy place".It really helps me to get a hold of my emotions and quiet my spirit. I love it and I have seen a huge difference in the way I feel towards others.

B.I discovered fried pickles. Oh lordy. Hold me back. Them things is taaaasty little critters. Jeez, I cannot stop thinking in a southern drawl. Oh well, I'm fixin to just go with it. So, about them picks'. They are dill pickle chips dips in batter and deep fried. You then dip them in this tasty sauce. It's salty and sweetish and sour and dilly. Yum. I want some. real bad. They are $4.50 for a small order so I can't just get them whenever I want. I can dream about them, though.

My roses are so beautiful this year. I say that every year. They are fantastic and huge and yellow with pink outlining the petals. I also have pretty climbing roses. I ALSO have a doggie licking my face right now. Now that doggie is breathing his doggie breath on my face. Now that doggie is trying to get me to play so he is biting my hand. I am bored of writing this.