So, per request from my adoring fans, I decided to write a new post even though I feel like I don't have a lot to say right now. I think I will write some things that are on my mind right now.

1. I cannot believe it is March 1. It feels like this winter just flew by.There is snow on the ground today but I am a little disappointed that we didn't have at least one big snow. I guess there is still hope. After said big snow I would then like the warm weather to come quickly. When I say warm I mean mild. I want a nice spring. I don't want it to go from freezing cold to boiling hot. I love spring. I adore the trees when they have the little flowers that smells so good. Apple blossoms are my favorite. The one tree that I can see from my kitchen window has buds on it already. This makes me happy.

2.I keep having recurring dreams about being in YWAM. It is never a good thing. I always find myself at a DTS and I never understand why I am redoing my DTS. I realize all of a sudden that I didn't pack anything and I made the decision on a whim without fully thinking it through. Then I realize that I left Mike back at home and I am so worried that our marriage won't survive it. Then I also realize that some of the people I knew from my actual DTS are staff and they are mean to me. It's horrible.

3. My 32nd birthday is March 25. I cannot believe that I am 32. That sounds so old to me. I still feel very much like a child in many ways. I wonder if there will be an age I get to where I feel like an adult.

1. They are unbelievably cute. Especially Figgy Pudding. I don't like to have favorites but he has the cutest face ever.

3. Fiona curls up in the bathroom sink and get's out when I need to wash my hands. She wants to drink from the sink-Mike hates this but I think it is funny.

4.They give licks with their sandpaper tongues

5. They are warm and nap next to me or on top on me

6. They can be left alone for extended periods of time and go to the bathroom in the litter box.(Figgy gives me the silent treatment if I leave him too long)

7. They meow and chirp in little trills. It is like they are singing sometimes.

8. They are always happy to see me.

9. Figgy carries this furry thing around in his mouth and meows at the bedroom door and drops it there as a present every night if I don't hide it.

I am trying to make my life what I want it to be. I love performing but haven't done it it a looong time.I tried out for Godspell yesterday. Our church is putting it on and I am truly excited to be it. I mean, that is, if I make it. I was told that they would let me know and Jonathan winked when he said it. So, I assume I made it unless Jonathan has a crush on me. He and Drew had only good thing to say about my audition so...I hope I made it.

I found Tucker a new home. What is this a sickness? Yeah, it is. I am mentally ill and I know it. I just don't want the responsibility of owning a dog. Even the best dog is too much for me. I have had panic attacks every day. I have sobbed until I can't cry anymore everyday. Mike is allergic. He was willing to work through that. I really hate myself right now. I loathe myself. I just woke up this morning and felt like I didn't want to keep the puppy just for the sake of trying to work through something. I didn't think it was fair to the puppy or to Mike. Mike had to watch me hyperventilate and sob and want to die every night. All over the puppy. I know there are people that actually love having puppies. They get joy from owning a dog. They are happy to see the puppy and get happy feelings when they think about the pup. I am the opposite. 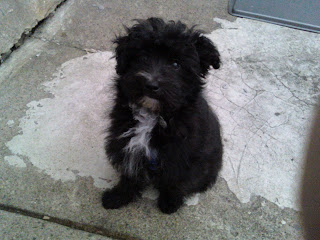 So, I did what I swore I would never do. I even had people that I told to tell me not to do it if I ever wanted to again. Sigh, I got another puppy. I think I did it because I was really sure that I could overcome my fears and panic attacks and keep it. I thought that if I could just find the right puppy for us that it would be great. I thought if I didn't set myself up for failure by researching the puppy that was right for us and making sure that I wasn't working for awhile and waiting until Mike was not going on a business trip that everything would be great.

So, I did all that. On Saturday Mike and I drove 2.5 hours to a place where they breed and also rescue. We specifically went to look at a little black pomapoo with white on his chest. He was 13 weeks so we were skipping the super tiny puppy stage which tends to freak me out. When we got there we walked into this small building where they were washing some small puppies. They obviously were cooing and snuggling them so that was a good thing. The girls informed us that they had to get the owner to show us the puppies. I looked into some of the crates and saw what I knew was the puppy we came to see. All alone in a crate. The lady named Bonnie came in and gave me a handshake(it was extremely weak, one of my pet peeves) anyway, she let the pup out and he raced around the room. Mike was slightly concerned that he was so energetic since he was mixed with pomeranian and he has known some really hyper ones. I knew that the pup was just excited to be out of the crate.Mike also remarked that some super tiny 5 weeks old puppies were insanely cute(and 600.00) I told him that I liked this one that was now licking my face. He was also a fraction of the price.

The lady groomed him for us and gave us a puppy pack. We bought a harness and a leash and were on our way home.

That night we went to Sarah and Jacob's for dinner. We had fun and then when we got home I started freaking out and crying. Mike assured me that everything was going to be fine and that he was our puppy and that we WERE. NOT. GIVING.HIM.AWAY. That night we put him in hiis crate and he slept through the night. I kept waking up with panic attacks and expecting to hear him crying. He didn't make a peep.

Last night I cried and freaked out again. Mike calmed me down.

This is the thing. God clearly wants me to keep the puppy because he is making this puppy virtually problem free. He sleeps through the night. He goes potty outside.When I need a break I can put him in his crate and spend time alone. He and the cats are ok. He is cute and lovable. I am just working through my issues and it actually feels really good.

So, we are keeping the puppy. His name is Tucker. Yes, the joke has been made about what we call him when he humps my arm...sorry but just being honest.

Anyway, I know that most people don't have these freak outs when it comes to a cute and lovable pup. I am weird but like I said, it is a phobia that I am confronting and it feels awesome to be working through it. As I write this a cute little addition to our family is sleeping next to me. He is very cute. A little stinky but very very cute.
Posted by merry at 2/11/2009 10:35:00 AM 3 comments:

When a house becomes a home

I am not sure when this happened but I finally feel like I have a home. Our house, though a work in progress, is so cozy and comfy that I just wanted to post some pictures for those who have never been there. Basically it is just the downstairs that I am showing cause we are still in the process of organizing upstairs but here are a few pictures to tide you over. It is tiny but I love it. 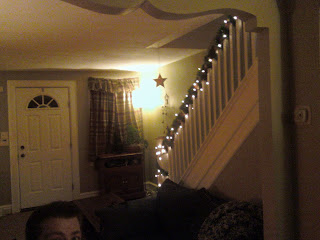 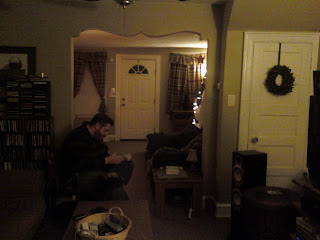 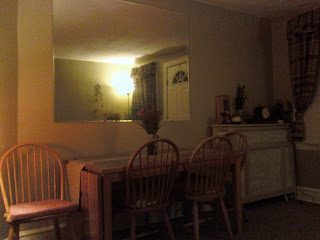 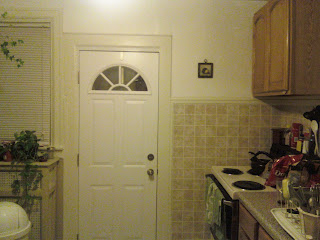